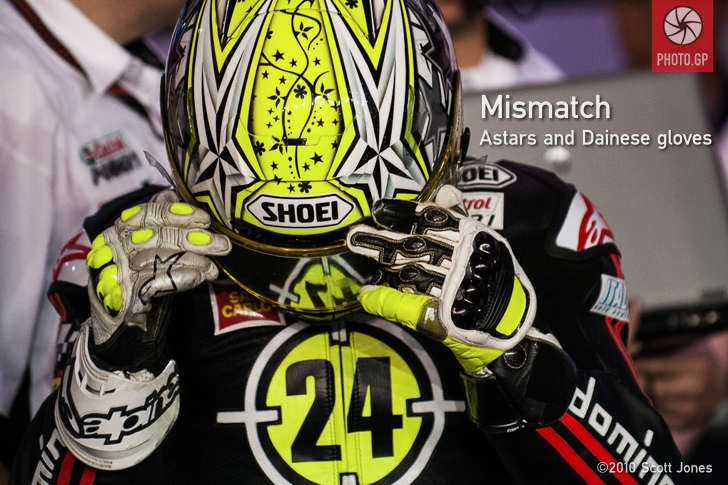 Please click on the above image to view it larger.

A few days ago I tweeted this photograph directly from its PHOTO.GP Gallery location and asked who could spot what was unusual about the image.

Several Twitter folks correctly identified what I was after, i.e. that Toni Elias is wearing one Alpinestars glove and one Dainese glove, though the latter is disguised with various pieces of tape so that the Dainese logo doesn’t show.

This image reminded me of a rider I work with once posing for a photo, suddenly realizing he was wearing a garment made by a former sponsor, disappearing for a moment and then returning with a replacement that aligned with his current sponsorship agreements.

Equipment that you don’t pay for, whether supplied for free or alongside an endorsement contract, is something everyone wants to hang on to; putting on a different brand of glove is not something done without a compelling reason. So why did Elias put on a Dainese glove when the rest of his outfit is thanks to long-time partner Alpinestars?

Though I thought I remembered something about Elias having a broken finger at the start of the 2010 season, I wasn’t sure.

Just now I was looking for something else from the 2010 season opener and ran across this image, which was not in my mental photo database (a very limited system, btw): Not only was Elias hobbling around on crutches, but as you can see from the sutures he’s recently had surgery on his left hand, which was still quite swollen. I suspect that Dainese glove was related somehow to the state of Elias’ stitched and recovering left hand.

Elias would go on to win the Moto2 title and become a World Champion in the 2010 season.