Limited Editions and other Rider-Signed Prints are guaranteed 100% authentic. Learn about our Authentification Process. 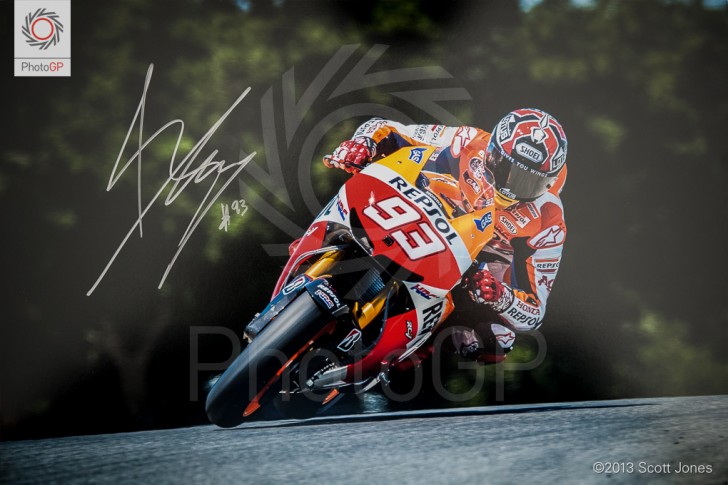 When you think Marc Marquez Laguna Seca many things might come to mind. First MotoGP rookie to win at Laguna Seca. First MotoPG rookie to earn eight podiums in first nine races of a season. Youngest rider to win back to back MotoGP races.

While I can’t say for certain, I believe that Marc is also the first rider to have been captured with both wheels in the air through Laguna Seca’s daunting Turn 1.

Marc Marquez, First in Flight commemorates Marc’s amazing first appearance at Laguna Seca in 2013. The photograph shows Marc at top speed through Turn 1, both wheels in the air, about to land in the record books. The above image is a photo of a signed print. To see the image larger please click on the image above.

This was one of the most challenging images I’ve ever attempted. Once again, I got lucky to end up with a successful shot. You can read the story behind how this photographed was captured in this article.

When I presented it to Marc for his signature, he gasped, “Whoa!” Then he asked if he could have a copy. I asked him while he signed away if he could tell that both wheels were leaving the ground, and he said yes, sometimes it happened in a way that he could feel. But I got the impression that feeling it at the time was somehow different from seeing it captured in a split second in this photograph.

Now that Laguna Seca is no longer on the MotoGP calendar, the uniqueness of this image has just increased!

For a much wider selection of Marc Marquez images, please click here.

This is a 24×16″ lustre print, mounted on Styrene. Each of the 50 copies in this limited edition was signed by Marc Marquez and Indianapolis Motor Speedway on August 15, 2013 and is individually numbered.

The print is available as a standalone print, or with two choices of mat sets with an engraved plaque that reads:
First in Flight
Marc Márquez, First Place, Laguna Seca 2013
First MotoGP Rookie to win at Laguna Seca
First MotoGP rookie to earn eight podiums in the first nine races
Youngest MotoGP rider to win back to back races Each copy comes with a Certificate of Authenticity that features this image of Marc, having completed signing the edition: There are no reviews yet.

Be the first to review “First in Flight” Cancel reply 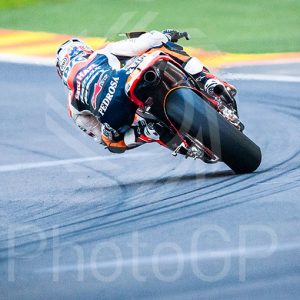