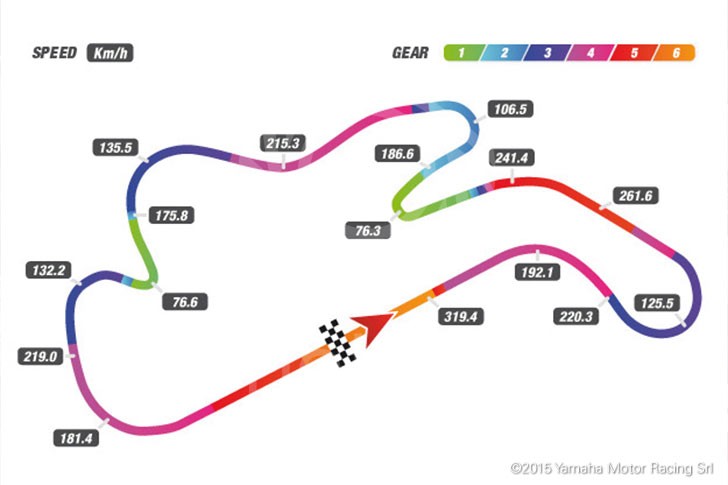 Yamaha’s Phillip Island track map shows two first gear corners, no surprise there as Honda and MG are both pretty tight. We also see two instances of quick shifts, as the Yamaha riders spend almost no time in third gear coming out of Siberia and then move right past second when exiting MG. This is more the type of thing we’d expect to see rather than the odd instance from Motegi when the map showed the riders going from first directly to fourth gear when exiting turn 5.

I’m a bit surprised to see that Lukey Heights in a third gear corner – I expected that to show second gear so again, I really like looking at these maps from Yamaha.

This version shows the top speed (and only use of sixth gear) as being 319 km/h (198.2 mph). The Ducati press release lists Phillip Island’s Top Speed as 346.2 km/h (Marquez, 2014). 346.2 kh/m is just over 215 mph, much faster that I’d have guessed for Phillip Island because the straight doesn’t seem that long, especially compared to a circuit like Mugello, for example. But then again, the MotoGP bikes are accelerating hard out of the final turn in fourth gear, so they are probably already going close to 200 kh/m when the track straightens out.

Thanks again to Yamaha for providing this series of maps with telemetry.

June 2016 Desktop Calendar – Back On Top