HRC and Red Bull Join Up 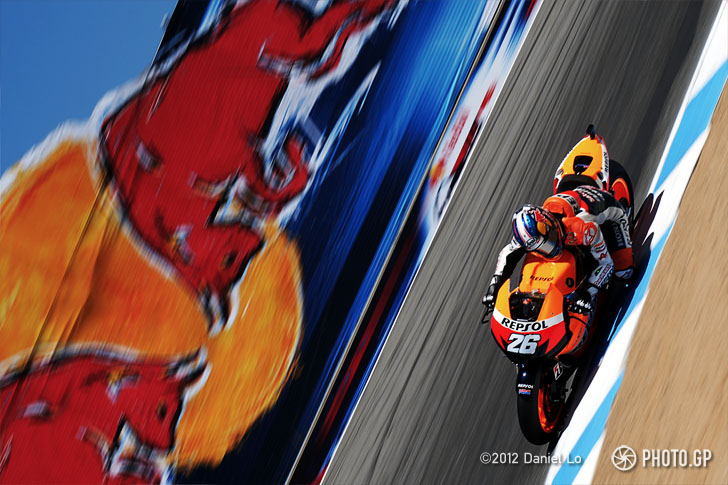 While the Austrian drink maker has sponsored Repsol Honda Team riders since 2006, this is the first official link between the drink and the racing team. The Red Bull logo will be part of the Repsol Honda livery for the next two years.

As you can see from Dan Lo’s excellent photo, the two color schemes go nicely together, with red and orange being the dominant tones.

Given Red Bull’s successful adventures in Formula 1, where the Red Bull-Renault team won the Constructor’s Championship from 2010 to 2013, would Red Bull be consider running their own MotoGP team at some point as they did in F1?

It seems more likely that, given MotoGP’s direction, Red Bull might become a sponsor on the same level as Repsol should the drink company desire greater exposure in motorcycle racing that they’ll get from this new deal with HRC.

On one hand it’s reassuring to see a major international brand increasing their involvement in MotoGP. Red Bull is already the title sponsor of two MotoGP rounds, those at Circuit of the Americas and Indianapolis Motor Speedway.

On the other hand, as David Emmett wrote about recently, the increasing reliance on energy drink sponsorship is a growing problem for a sport that continues to struggle to attract a broad range of sponsorship.

At the beginning of 2014 season, Red Bull rival drink maker Monster became a sponsor of the Factory Yamaha team and added its logo to the liveries of Valentino Rossi and Jorge Lorenzo. So after all this may just be a case of Red Bull not wanting to be outdone by the green and black brand.

HRC are pleased to announce an evolution in their partnership with Austrian-based energy drink manufacturer, Red Bull.

After nine years of cooperation with the Repsol Honda Team and its riders – starting with Nicky Hayden and Dani Pedrosa in 2006 – from next season the Red Bull logo will also feature for the first time on the Honda RC213V machines of Marc Marquez and Dani Pedrosa, and Red Bull will become the Official Energy Drink partner of the Repsol Honda Team, for the next 2 years, until the end of 2016.